Hannah GillPosted on April 25, 2019 Posted in Workshops and Pedagogical Materials — No Comments ↓ 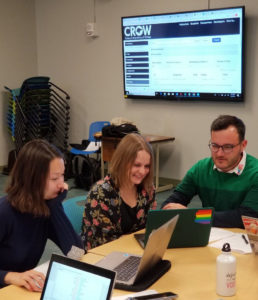 Participants work with Crow researcher Novikov at the SLAT roundtable

This semester, Arizona Crowbirds along with representatives from MACAWS, our new Multilingual Academic Corpus of Assignments: Writing and Speech, received the opportunity to present at the SLAT Roundtable. Our presenters were Aleksey Novikov, Emily Palese, Jhonatan Henao-Muñoz, Dr. Shelley Staples, and Hannah Gill. At the presentation, we introduced the two corpora (Crow and MACAWS) and the basic premise of Data-Driven Learning (DDL). With DDL, students and instructors use a hands-on approach to examine authentic corpus data to discover language patterns that can then be used to create lessons, activities, and instructional materials.

Since one of our main goals was to give participants concrete ideas about incorporating material from the corpus into their classroom settings, we gave examples of how Crow and MACAWS could be used in the foundations writing classroom (Crow) and in Russian language classes (MACAWS). Participants were then given the opportunity to split into groups and focus on creating activities tailored to the two corpora. For Crow, we used our online interface, released in October 2018. For MACAWS, we used a sample of off-line texts with the freeware program AntConc. The participants, most of whom were instructors in either the Russian department (MACAWS) or in the Writing Program (Crow), were given the chance to ask questions, voice concerns, and work closely with various features of the two corpora to explore how the corpora could be used to design their own activities, lessons, and instructional materials. 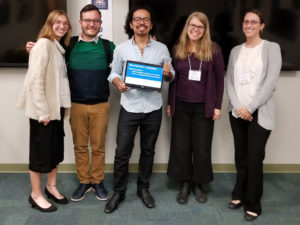 We ended by sharing the next steps for both Crow and MACAWS development. For Crow, this includes an expansion of the repository and improved capabilities for intake of pedagogical materials from instructors, which we plan to launch in Fall 2019. For MACAWS, this includes a planned beta release of its interface (built using the same front-end as Crow) for August 2019. We were also able to get feedback on the Crow interface about what was useful and possibilities for improvement. Since the presentation, we have discussed ways in which we can translate the advice and participant input into changes to the Crow interface.

Here are slides and the materials that we used in the presentation.